SME Chamber of India and India International Trade Center (Investment & Trade Promotion Organisation) jointly organising Conference on “Venture Capital & Private Equity for SMEs” onWednesday, 8th February 2017 at Mumbai and will provide unique opportunities to SMEs to understand how to obtain Venture Capital for unique projects or new innovative business ventures as well as private equity for growth and expansion, new technology, make acquisitions, expand working capital and to bolster and solidify a balance sheet. This conference will highlight on the awareness about VC/PE, its importance for business growth and expansion, formalities and procedures, preparation of attractive Business Plan, expectation from investors and interaction with Venture Capital & Private Equity Funds/ Institutional Investor.  SME Chamber of India regularly receives enquiries from investors and PE / VC funds for potential SMEs for investment opportunities.

Enclosed Agenda of the conference along with the Speakers.

We request you to confirm your participation at the earliest since we are having limited seats.

Let’s face it – Getting financial backing is difficult. For most, it’s not a pleasant experience. We are trying to revolutionize this by giving you an opportunity to impress our panelists with your Startup idea who might back you with INR 1.5 Million in just 10 Minutes!

Lendingkart Group aims to provide Working Capital loans to SMEs all over India.

We help you grow!

REACH
Service offered across India. Even in smaller towns.

SIMPLE PROCESS
Get started with only your bank statements and VAT returns. 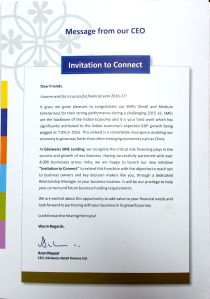 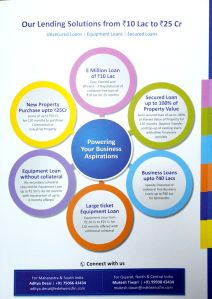 An early-stage startup usually struggles to raise funds. Founders typically have to run after multiple angel investors, spend considerable time and effort explaining the idea, and negotiate with investors on the termsheet, the formal agreement stating the terms and conditions of the investment.But now, as the startup and angel investing universe has expanded, a host of technology platforms have emerged to bridge the gap between startups and investors, and ease the whole process of investment. LetsVenture, founded in 2013 by IT professional Shanti Mohan, was one of the earliest in the space and is by far the biggest today , but there are others like Termsheet.io, Enablers, VentureCatalysts and Angle Paisa.

They screen the startups and do a certain amount of due diligence so that investors know they are dealing with reasonably eligible candidates. They have tie-ups with legal entities that both sides can go through, saving a significant amount for resource-constrained startups, and some have standardized termsheets that reduce a lot of the headaches and cost.

Neha Khanna, founder of Enablers, says the company spends around three weeks trying to understand the founders and the business before they list it on the platform. “We replace advisers who would usually charge a high price and would want to be on the board of the company ,“ she says. Enablers, started in March last year, has over 40 startups and 100 odd investors listed on its platform and has helped close 7 deals so far, all transactions between Rs 1crore and Rs 5 crore.

Once the founders and their product-market fit have been evaluated, the platforms help the startups and investors gauge the fair valuation.“Traditionally , after the entrepreneur shakes hands with an investor, the lawyers of both parties come into the picture and there is a lot of uncertainty involved till the last minute. The legal and financial evaluation may take up to six months,“ says Vivek Durai, founder of Termsheet.io.

Termsheet replaces that process to an extent with a pre set ready-to-sign termsheet that is prepared once a startup has put together the necessary data to launch a funding round.The documents are sent to all parties involved and leaves no room for negotiations. With this, deals are often completed within a week. Termsheet’s first deal was the one in which electric scooter maker Ather Energy closed a million-dollar funding round with Flipkart’s founders Sachin and Binny Bansal.

While most platforms focus on high value investors, Angle Paisa’s USP is its lower investment bar. “Usually , in other platforms, the minimum ticket size is Rs 2 crore.We connect companies with individuals who are ready to invest as low as Rs 50,000,“ says founder Himanshu Kumar.

Sharad Sharma, co-founder of software product asso ciation iSpirt and an investor on the LetsVenture platform, said that funding platforms operate in a winner-take-all market. The platform that has more active investors will attract more startups, creating avirtuous circle, he says, indicating that LetsVenture, with over 1,600 investors, will have an advantage.

Sharma expects LetsVenture to do 50 deals this year and the other platforms to collectively do another 70 deals. Given that around 250 angel invest ments are expected to happen this year, the platforms would together account for almost 50% of the total deals.

The platforms make money by charging a fee or a commission on the transaction.Angle Paisa takes 5% of the profits that its investors make. Termsheet charges a 1% commission on deals. LetsVenture charges investors a membership fee and charges startups a deal fee.

And although the current funding slowdown might be affecting late stage investments, Khanna of Enablers says platforms like hers are gaining momentum. “A startup and an investor value us more now than ever, since both the parties are looking to connect with the right set of people,“ she says, adding that they get interest from over 600 startups every month.

I’m pleased to tell you about the imminent launch of my new seven-week Massively Open Online Course, How to Finance and Grow Your Startup – Without VC. It does what it says in the title and can be found on Coursera, the world’s largest platform for MOOCs. Enrolment is free of charge.

I’d be incredibly grateful if you’d forward this news to your entrepreneurially-inclined friends and networks.  My goal is for 100,000 people around the world to sign up, so your assistance will be instrumental in helping me get there! The course is now open for info and enrolment at www.coursera.org/learn/startupfinancewithoutvc. The learning starts on April 22nd!

Many thanks in advance.

Ratan Tata, the one-man venture fund capitalist, has invested in a total of 22 start-ups

till now. The former Chairman of Tata Sons, who retired from the company in 2012, still remains its chairman emeritus.

Here are the things you must know about Tata’s spate of investments:

Tata started investing in start-ups in 2014 and in over two years has invested in as many as 22 start-ups till date.
Within a month of start of the year 2016, Tata has invested in four companies, namely cashback and coupons site CashKaro, Tracxn, Dogspot and baby care platform FirstCry.
In 2015, Tata invested in about 14 startups, including UrbanClap, CrayonData and Paytm.
His first investment was in a US-based wind energy start-up Altaeros in 2014.
Snapdeal was the first Indian start-up in which Tata invested in.
The investments by Ratan Tata are valued by the start-ups not for its monetary value but more for the brand name and recognition it brings along with it. It is seen more as a stamp of approval to the business model of the start-up by the industry veteran.
The amounts of investment in the start-ups have mostly been discreet but are said to be relatively small amounts.
Most of the investments by Tata have been in the digital and e-tailing space. From furniture curator Urban Ladder, jewellery online retailer Bluestone, car comparing and selling portal Cardekho, PayTM, women’s clothing portal Karyaah to Sabeer Bhatia’s communication company Sabse technologies and bitcoin company Abra, clearly substantiate Tata’s faith in the growth of technology and online space.
Investments in the social sector: With Tata Group known for its philanthropy efforts, he invested Rs 2 crore in Swasth Bharat, a venture for healthcare facilities for the poor. He also invested undisclosed amount in Grameen Captial’s debt fund.
Other major investments: The only smartphone company to get investment from Tata turned out to be Chinese handset maker Xiaomi. Amongst the various taxi aggregators, Tata chose Bhavish Aggarwal-run Ola to invest in.
http://www.businesstoday.in/buzztop/buzztop-corporate/10-points-on-tata-sons-ratan-tata-spate-of-investments-in-startups/story/228415.html

The workshop will have pre-arranged one-on-one meetings with some of India’s top early-stage investors to present your business plan, get the advice to set direction for way forward. You will get 10 minutes to speak one on one to your three preferred India’s top Investors and pitch your business idea to them.

This workshop will give you excellent opportunity to network and present your business ideas to these investors.

The registration charge for the event is Rs.2500/- only (inclusive of service tax).

To register, fill the attached registration form and send across to Ms. Andrea Fernandes at andrea.fernandes@imcnet.org  or call on 2204 6633.

The undermentioned Goldman Sachs 10,000 Women programme is very well structured and beneficial. Many women entrepreneurs may be falling under the category mentioned and could take the advantage of it being offered free.

As you may be aware, we have been running the Goldman Sachs 10,000 Women initiative since 2008, and more than 1300 women entrepreneurs from across the country have completed the programme. Now as we embark on the next round programmes under this, I thought I would reach out to you with a request for help.

Just to refresh your minds on the initiative, the Goldman Sachs 10,000 Women initiative is a campaign to foster economic growth by providing women entrepreneurs around the world with a business and management education and access to capital. The objective of the programme is to help small business owners to become more bankable and position themselves to access appropriate sources and levels of small business funding and capital. The programme is entirely funded by Goldman Sachs and the selected women entrepreneurs do not have to pay anything to attend the programme.

This year, we plan to conduct two cohorts of the programme, one in Hyderabad and one in Mumbai. This year there has been some changes in the profile criteria of candidates for the programme. We are looking for women in businesses with a turnover of between Rs. 60 lakh and Rs. 3 crore, who meet the following criteria.

Shortlisted women will be selected based on an application form and a face-to-face interview.

If you know of women entrepreneurs who meet the criteria and may be interested in attending this programme, please connect them to my colleague

Ratnakar Varanasi <ratnakar_varanasi@isb.edu>,  who can help take it forward. I really appreciate your help in reaching this information out to the relevant audience.